A client recently lost data on a portable hard drive due to mechanical failure. The external portable hard drive contained the only copies of data the customer needed and had data going back years with multiple computers worth of information back to 2005. The drive was a Seagate External Backup Plus Portable Drive 1TB 2.5″. The exact model of the Drive was ST1000LM024. The Seagate Samsung Spinpoint M8 ST1000LM024 1TB 5400 RPM 8MB Cache SATA 6.0Gb/s 2.5″ laptop hard drive. This drive was also sold as an internal drive, and in Lenovo and Samsung laptops pre-installed.

The client did not realize the hard drive was physically bad and needs to be operated in a cleanroom environment with specialized recovery tools and technology. The client had opened the drive, damaged the casing, and left fingerprint oil on the top platter. 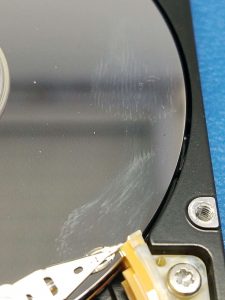 The drive had stuck heads.  Since the drive was opened outside of a cleanroom the recovery was much more complex and time-consuming. The client did not know about the screw hidden under the cover and the top cover of the drive was bent while trying to pry it open. The read/write heads were also failed. I previously covered why it is such a bad idea to open a hard drive in this article.

Decontamination and cleaning of the fingerprint took place before attempting a recovery, then donor parts were sourced and the drive was recovered. The data was cloned to a new USB 3.0 1TB hard drive and returned to the customer.  The total process for the decontamination, sourcing of parts, and retrieving the files took about 6 weeks.  After completion, the files were checked to make sure they were not corrupt and were checked for data integrity.

While it is an older drive here is a diagram of the internal components and workings of a hard drive.

Contact me for a Professional Failed Hard Drive Recovery

These drives had users reporting failures of the same internal version on NewEgg’s product review section. Multiple users report failing after 2-3 years such as “Failed after 3 years“, “Failed after 2 years, horrible drive“, “Failed at 2.5 years” and other users developed issues such as “It is insanely slow. Random mundane tasks take it to 100% disk usage, making the laptop essentially inoperable.”

The Spinpoint is a model of 2.5″ hard drives for portable and space-constrained devices that provide a massive amount of storage for the time. A number of Seagate/Samsung Spinpoint M8 ST1000LM024 and ST1000LM025 hard drives have been seen by data recovery companies with head failures. While I can’t judge failure rates or brands of drives there seem to be a good amount of these drives failing after 3 years from what I have read and heard.  The ST1000LM024 a series is used in laptops and external hard drives which also increases head failures due to dropped drives or drives with accidental damage. The external models use a USB interface, rather than a SATA interface. These drives were previously marketed under the model numbers HN-M101MBB.

Clients Response: The client was amazed at the outcome, professionalism and they can proudly give a recommendation for my services.