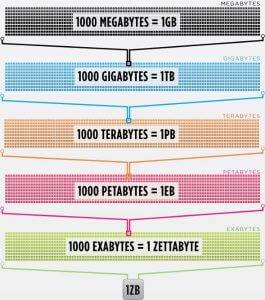 How Big is a Zettabyte?

On Monday Gartner, Inc. released a report predicting consumers would be hoarding a global total of 4.1 zettabytes worth content by 2016.

But most of us don’t really have a handle on how big a zettabyte really is.

A terabyte was considered a lot of space. In 2008 I though a single terabyte drive was all I would ever need again. Improvements in hard disk technology have allowed the humble magnetic drive to reach the dizzying heights of 3TB terabytes of storage, but Cisco foresees a future that’s a few orders of magnitude more impressive. Pinpointing 2016 as the commencement of what it calls the zettabyte era, the company has put together a handy infographic to show us just how much data can be fit into one: you can alternatively think of it as the equivalent of 250 billion DVDs, 36 million years of HD video.