After 10 years of support Windows 7 is nearing an end

Last updated October 16th, 2019
Microsoft is about to end extended support for Windows 7 on January 14th, 2020. Support Windows 7 is nearing an end with only a little over 3 months left. 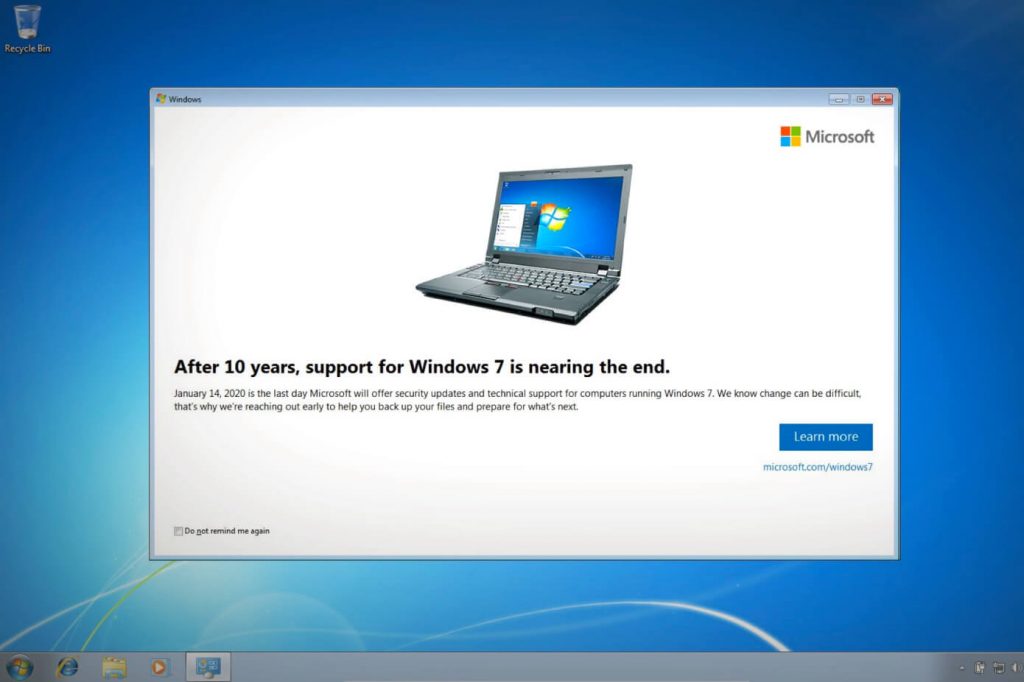 What is extended support? How is that different from normal support?

Support has already ended for Windows XP and Vista. Support for Windows 7 ends soon, with Windows 8/8.1 mainstream support having ready-ended and extended support ending in 2023.

What does this mean for you?

“End of life” means Microsoft no longer supports Windows 7. While you can continue to use the Operating System it is at your own risk. It would be strongly urged to move to modern and supported Operating System.  Windows 7 will be 10 and a half years old when support ends. Once support ends no security updates or patches are available making a computer running Windows 7 vulnerable to not only new computer viruses and malware but also to any operating system exploits.

I can assist customers with getting, and setting up a new PC and migration of existing data, and installation of programs.

How should I upgrade?

For most Windows 7 users,  purchasing a new Windows 10 computer will be the recommended path forward. While some Windows 7 computers will run Windows 10, I recommend a minimum of an Intel i5 or AMD Ryzen, with 8GB of ram and an SSD (Solid State Drive). Older computers without these specs might work and be slower, some may not work at all due to no driver support for older hardware.

Windows 10 launched July 15th, 2015, and has a Semi-Annual (targeting March and September annually) support cycle. You can read more about it here.

For many consumers and businesses, Windows 7 is still a popular system of choice. However, there are only 105 days left until the end of support some ~45% of small to medium-sized businesses are still running Windows 7, 38% of home users/home office PCs are on Windows 7. Larger companies have an issue too, the UK’s National Health Service, which was infected with WannaCry, in July that had one million PCs running on Windows 7.

Windows 7 under attack as the end of support nears

Windows 7 will be retired in under 3 months. Microsoft will release the very last security updates for this decade-old operating system on January 14, 2020. The older this operating system is and the closer we get to its final retirement date security risks rise.

Webroot who is is a private American company that provides Internet security for consumers and businesses published a report that reveals that Windows 7 infections increasing by 71%, and the number of IPs that host Windows exploits grew by 75%.
In general, computers using the current Windows 7 operating system are more than two times likely to be infected versus a Windows 10 computer. That risk will increase once Microsoft stops releasing security patches for Windows 7.